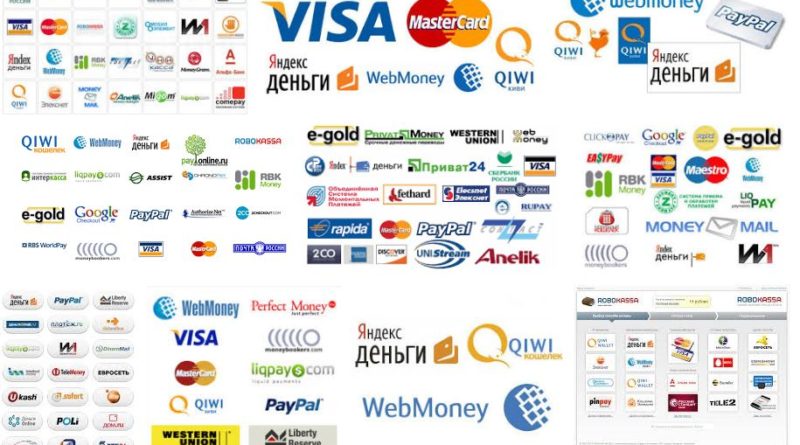 Online payment systems in the Russian segment of the Internet is so much that a potential buyer there was a problem of choice. In this review, some of them were not included — perhaps unfairly. In fact, real operating systems are very few, and those who are not shy to disclose information on their turnover and transactions, and at all units. Below is presented an attempt of a comparative analysis of online payment systems on the basis of information obtained from publicly available sources. It is not excluded that some important points are not found worthy of reflection, but it only says significant gaps in the system inform clients, including potential. There are three basic mechanisms of payment (payment instruments) used in online payment systems:

Most existing systems cannot be attributed to a particular type: so, sometimes within a single system, using several mechanisms, but sometimes the system is based on hybrid scheme. The payment system was evaluated by the following parameters:

Activity — evaluation of different sources of information about the actual operation of the payment system. There are several stages of activity: the system does not work at all, the system is supported by several online stores, the system makes payments regularly and works with a significant number of electronic outlets.

Speed — or lack of delay between payment by buyer and receipt of money (or their substitutes) store.

Micropayments — the degree of effectiveness of the system for payments on summu less than $ 1 a day. If Commission payments are fixed, i.e. not dependent on the amount of the transaction, or if the money is transferred with a delay, then such a system for micropayments ineffective.

Online registration — ability to register in the payment system via the Internet.

Refunds — a built-in payment system opportunities refund if the buyer refuses from the deal. Might not be provided or be declared, but have difficulty with implementation.

Cost — the costs associated with participation in the system (separate for online stores and customers). Is accounted for as the cost of registration, and subscription fee and a fee for transactions.

Durabilityü encryption algorithms — the level declared by the developers of the system (implementation level is not considered). May be acceptable or insufficient.

Compliance with legal regulations of the Russian Federation — the level declared by the developers of the system. May be incomplete, or may be missing data on the legislative acts that regulate the operation of the system.

Documentary evidence — the ability to audit transactions in the system, receive statements in paper form according to the results of the transaction (due to the fact that the law “About electronic digital signature” is not accepted).

Certificates and licenses — certificate/license issued by authoritative organizations reflect the desire to ensure an independent examination of the payment system the system must be serviced with any Bank or specialized financial institution. It seems that for the Russian online payment system, it is preferable to rely on domestic Bank (of course, for one whose license has not been revoked) than in the offshore.

Description of the system — transparency (comprehensiveness, clarity and accessibility).

ASSIST Payment system ASSIST and CyberPlat could be considered as a whole — both built and maintained by the same organizations (the St. Petersburg company “Reksoft” and Moscow CB “Platina”), use a single secure and certified server and the same standards of information security. But the difference is still there. If ASSIST is designed to service a wide range of users and allows payment without prior training, CyberPlat require installation special software and open an account in CB “Platina”.

( assist.ru ) launched commercial service in April 1999 For a purchase in the online store using ASSIST enough to have a credit card VISA, EuroCard/MasterCard, Diners Club, JCB, American Express, or to be a client of one of the largest Internet service providers. Thus, the ASSIST is basically a system for payments by credit cards, but also includes some elements of the debit schemes. According to the Web site ASSIST, 61 the company uses the system for payments.

In order to pay via CyberPlat ( cyberplat.ru ), you must open an account with CB “Platina”. For credit cards online check-in is possible. Payment by cheque is digitally signed by digital signature. CyberPlat is developingplayed mainly as a tool for calculations in business-to-business sector of e-Commerce (“business to business”), but it does not prevent the system to attract individuals as customers. The concept of CyberPlat lies debit scheme, allowing you to use credit cards. Recently the system has an opportunities for Internet banking. It should be noted that for these operations the characteristic delay of payment. According to the Web site CyberPlat, the system contains more than 56 thousand users, it serves 82 companies and 130 companies are at the stage of connection.

WebMoney ( webmoney.ru) can be attributed to the systems working with digital cash. At least for the user it looks that way. At a deeper study in it are elements of the scheme debit and Internet banking (with very limited funccee). An interesting feature of WebMoney is the equality of all users of the system — like stores and buyers — and the ability to conduct payments between individuals. Provided a secure payment (with final transfer of the money only after receipt of the goods by the buyer). Unit WM is tied to the US dollar. Emissions WM conducts International Metal Trading Bank Inc. (IMTB), registered in Nauru (Pacific ocean). It is argued that IMTB provides 100% redundancy WM in U.S. dollars. In Russia development and technical support system is engaged in a “VM-CENTER” is a non — profit organization that unites users of WebMoney. Customers of the system are many online stores, but there are almost no large.

Debit system focused on work with Russian-speaking audience Network abroad, mainly in North America. It is possible to use credit cards. The minimum amount for registration is $ 20. The company declares the conformity of its activities to the laws of the state of Virginia, United States. All service organizations are also under the jurisdiction of the United States, which is not very convenient for Russian users. According to the Web site, customers of the system are more than 50 thousand users. Among its partners — a large number of online stores at russianshopping.com.

It is a project of Bank “Taurian” and group of companies “Alkor holding”. This system allows you to make purchases via the Internet and to make instant and secure payments with the electronic purse of the buyer. For carrying out of calculations between participants of the system PayCash uses e-money liabilities issued by the Bank “Taurian”. System slavewill develop, but the number of online stores accepting payments through it is small. It should be noted that the concept of information security and the legal issues worked out very carefully. PayCash has the license of State technical Commission of Russia. The system received a high rating of independent expertise of information security for which they were involved in one of the most famous world experts on civilian cryptography Bruce Schneier. “Elite” System “Elite” ( imbs.com/protokol.htm ) is a joint project of the JSCB “Avtobank” and “It”. Payment is made using VISA cards, EuroCard/MasterCard, “Union card”, American Express. The money transfer takes one to three days. The system is supported by several Internet shops on the Web server imbs.com however, information about the actual transactions are not.

System Instant! ( paybot.com ) allows PRand Domostroitel card or Bank account to pay for goods and services in online stores, the card details should not be transmitted (which reduces the risk of fraud). Instant! served “ELBIM-Bank”, but now his license is revoked, so that the operability of the system in question. Instant! used only in one online shop operating on a Web server system.

System “GRADO” ( grado.ru ) developed by KB “Gradobank” and is intended to cashless electronic payments. “GRADO” is a system of Internet-banking, allowing the party to transfer funds from your account in the “Gradobank” to the account in any Bank of the Russian Federation. System client “GRADO” for the transaction is sufficient to know the Bank details of the online store, while connecting the store to the “GRADO” is not mandatory. Party systemwe can assign a security code ongoing payment transaction that allows the buyer to delay payment if the seller has not fulfilled its obligations in terms of quality and timing of services. According to the developers of the system, clearing center “GRADO” is intended mainly for interbank payments, while buyers and stores should work with member banks of the system. However, at the time of writing this review in the register of banks-participants were only the CB “Gradobank”. TELEBANK

( telebank.ru ) developed by KB “GUTA–BANK”. Operations are carried out through the Internet (around the clock) or by phone (in automatic mode, ie, with the help of tone dialing — round the clock, through the operator — from 09:00 to 21:00). The completion of the payment takes from one to four days. Through the “TELEBANK-online” you can make communal BoardJI and to pay for telecommunication services are included in the system operators (“Bee Line”, “Mobil Telecom”, MSS, MTS, “MTU-inform”, “NTV Plus”, “Vesso-link”), to perform operations with plastic cards of certain systems (the”Union card”, Visa, Europay/MasterCard) and foreign currency transactions (US dollars, euros, German marks, pounds sterling), as well as to transfer funds to any address in Russia and abroad. If the seller of goods/services included in the system “TELEBANK-online” speed of payment is greatly increased. In General we can say that in Russia there is a possibility of performing online payments. There are all the necessary elements as the legal framework and technological and financial infrastructure.

Many payment systems declare their readiness, i.e. on possibility of accession of third-party banking and financialout of the organizations. This is definitely the right approach — banks-operators of existing systems can not boast of an extensive network of branches, a result of the online payment system developed mainly in Moscow and St. Petersburg.The exception in this regard amount to only a few systems (from credit cards) where the user does not have to be a client of a particular Bank. Apparently, this is due to the high activity of the system operation ASSIST. But this approach has an obvious disadvantage — quite a high risk of fraud. According to some reports, more than 20% of the authentication attempts in the system is initiated with the use of fake or expired credit cards.

Considering all the above, it is possible to draw the following conclusion. Online payment system of the future must: